Originally published in 2014 (and re-published now just for fun!) 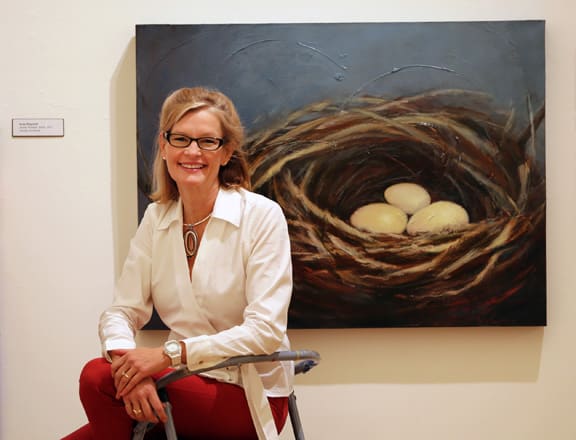 If anyone was looking for Holly Van Hart on Christmas Day, she could be found in the studio of her Saratoga home “painting up a storm.”

Fresh from placing first in the Triton Museum of Art’s 2013 statewide painting competition, Van Hart has been busy preparing for a series of exhibitions this year.

“I have a good idea of how many works I need. I just have to work hard at creating good works,” Van Hart said just weeks after a reception where she was announced as one of two first-place winners in the Triton competition for her 30-by-40-inch painting Possibilities Abound. Along with the work of fellow first-place winner Cuong Nguyen of San Jose, Van Hart’s painting, depicting a nest cradling three eggs, was tops among 92 works that were ultimately selected for exhibition from more than 1,000 entries.

Van Hart’s prize is a solo exhibition at Triton in November. For that, Van Hart is building on the theme of Possibilities Abound, one of several abstract nest paintings she has all over her home.

For Van Hart, it’s the symbolism that draws her to the subject matter. Nests, she said, represent our homes, and eggs stand for lives yet to be hatched and the possibilities they have ahead of them.

Eggs also signify self-invention, a concept that Van Hart applied in her personal life in June 2013 when she quit her job at Microsoft to pursue oil painting full time.

“I was a high-tech sales operations director for many years. I had a really good job and it was fun, but this is funner,” she said with a laugh.

It’s a decision she has not regretted, she said.

“The whole time [I was working], as a hobby I was doing art, drawing, watercolor, acrylics and then oil,” she said. “I always liked it as a hobby, and I got more and more passionate about it. When I thought the time was right, I switched to doing it full time.”

The extra time has given Van Hart the opportunity to immerse herself in her hobby, and although she no longer keeps a strict 9-to-5 routine, that’s not to say she doesn’t work hard at her craft.

“I work every day,” she said. “I paint full time Monday to Friday, all day. On weekends I sometimes paint or do art business stuff.”

Aside from abstracts, she also enjoys nature and landscape paintings. Her past works include figures of people in action and a series of works based on the sculptures of Rodin.

Van Hart’s paintings have been exhibited in Los Gatos. In 2009, the Los Gatos Art Association named her as its artist of the year.

This year will present several opportunities for the public to view her works. In March, Van Hart will display her paintings at Mike’s Cafe in Palo Alto, and in May she will be participating in Silicon Valley Open Studios, an annual event when artists open their home studios to the general public, allowing them to converse with the artists and purchase artworks directly.

Triton’s Statewide Painting Competition is held every two years. This was the first time in the museum’s history that two first-place winners were selected. The exhibition featuring the 92 selected works will run through Feb. 2. The Triton Museum is at 1505 Warburton Ave., in Santa Clara.

Here's a blast from the past . . . originally published December 2013, and updated…

A couple of years ago, I set about creating a brand new art website (the…