Here’s a blast from the past . . . originally published December 2013, and updated afterward with new links – 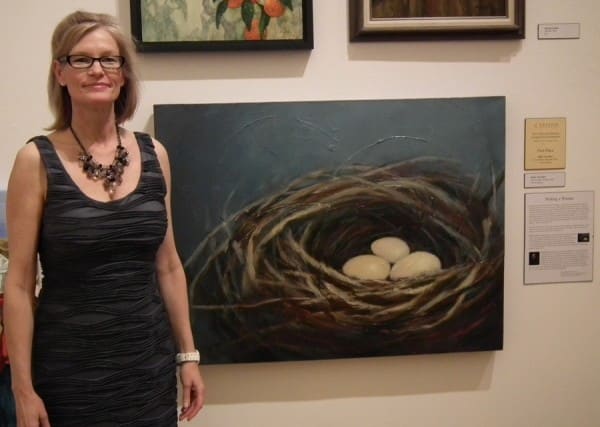 The competition, which was open to just California artists, drew more than 1,000 entries. From those entries, 92 were selected to be exhibited at the Triton Museum.

The winners were chosen by a panel of three jurors from the Triton Museum, including Chief Curator Preston Metcalf, Curator of Education Ester Fernandez, and Registrar/Curator Stephanie Learmonth.

Van Hart’s winning entry, an oil-on-canvas painting entitled “Possibilities Abound,” was showcased at a Dec. 13 reception for the winners at the Triton Museum. The nature-themed painting depicts a collection of eggs in a bird nest.

In acknowledging Van Hart’s first prize, the Triton curatorial team was complimentary of the artist’s style and technique. “Holly Van Hart warmed us with her painting Possibilities Abound. A nest cradles eggs, rendered with a confident, loose brushstroke that evokes a sense that this could be any nest, anywhere . . . We are seeing nothing less than the potential of the human spirit, nestled in nature’s bed,” the team wrote.

Van Hart’s previous awards include 2009 Artist of the Year from the Los Gatos Art Association, and a California State Fair Merit Award.  She is an art docent and volunteer math teacher at Foothill Elementary school in Saratoga.

After working 20 years in the Silicon Valley high-tech sector, Van Hart recently decided to move on and pursue a new career as a full-time artist. “I plan to enjoy a long career as an artist because this definitely feels like what I was meant to do,” she said.

The Triton Museum of Art is located at 1505 Warburton Avenue in Santa Clara, California.

A couple of years ago, I set about creating a brand new art website (the…

I was honored to be interviewed by Heather Durham on her Silicon Valley TV show.…

Feeling honored to be interviewed by San Jose Creatives. Huge thanks to Shannon Amidon (for…

A new article published on The Commissioned! Meet Holly Van Hart, the Energetic and Calm…